The serum thyrotropin (thyroid stimulating hormone, TSH) concentration is usually measured in human patients as part of the first-line test for the thyroid function and thus considered best for screening overt and subclinical hyperthyroidism (Ross, Ardisson et al. 1989, Bahn Chair, Burch et al. 2011, Peterson, Guterl et al. 2015). With regards to canine and feline, TSH concentration plays an important role as a biomarker to detect failure of thyroid function, as well.

The hypothyroidism is known to be a common endocrinopathy in dogs. Although it was believed that some cases of canine hypothyroidism were caused by autoimmune thyroiditis, it may also be a result from an inability of the pituitary gland to synthesize and secrete TSH, which results to secondary thyroid follicular atrophy (Ferguson 2007).

A classic case of adult-onset hypothyroidism present symptoms of lethargy, weakness, dullness of mental attitude and dermatological problems including alopecia or recurrent skin infections however, in some cases, there are only manifestations of general neuropathy or myopathy (Jaggy and Oliver 1994, Jaggy, Oliver et al. 1994, Ferguson 2007). Being considered as a multisystemic disorder, general medical evaluation should be conducted for suspected cases, including clinicopathologic evaluations (Ferguson DC, Hoenig ME, 1991; Ferguson DC, Hoenig M., 2003) (Ferguson 2007). 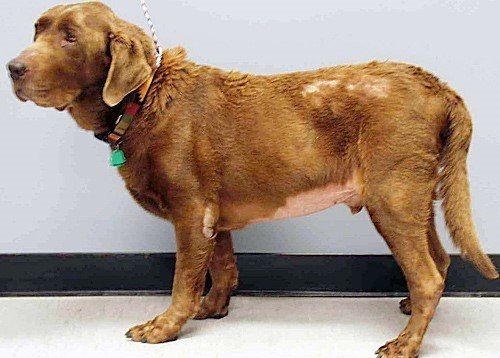 Having false-positive test results are common in hypothyroidism in canines and diagnosis can be challenging, thus, diagnostic testing should be considered to animals presenting clinical and clinicopathologic signs that are consistent with hypothyroidism (McCann 2015). The mostly used diagnostic criteria is with low total or free T4 concentration combined with a high TSH concentration in serum (Dixon and Mooney 1999, Shiel, Sist et al. 2010). The elevated concentration of TSH in dogs with primary hypothyroidism is expected in response to negative feedback of thyroid hormones on the pituitary gland. However, TSH as a sole marker of the disease is not effective due to possibilities of normal TSH in hypothyroid dogs and elevated TSH in euthyroid dogs, resulting to poor sensitivity. Thus, it is usually combined with reduced T4 or free T4  for higher specificity in diagnosis (McCann 2015).

The hyperthyroidism in cats is a common disease in older cats and like in humans, hyperplastic or adenomatous nodular changes in the thyroid are present and peak at the old age (Wakeling, Elliott et al. 2011). This common feline endocrine disease has multiple factors likely involved, including genetic susceptibility (Taylor 2017) and has been diagnosed in 1.5–11.4% of older cats across the world (Carney, Ward et al. 2016, Taylor 2017).

A commercial feline-specific thyroid-stimulating hormone (TSH) assay is not yet available in the market, and in some cases, feline samples are analyzed using canine TSH assays, however, delicate differences in TSH at low levels may evade detection. The TSH should always be interpreted with corresponding tT4 or free T4 results (Taylor 2017). An excellent sensitivity is highly suggested if the TSH below the limit of detection is found in a hyperthyroid cat (Peterson ME, 2016)(Taylor 2017).